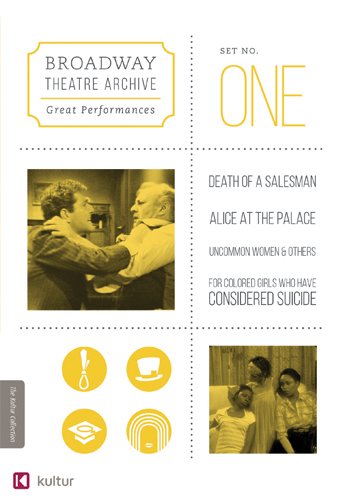 Ever want to see the Meryl Streep performance of Alice at the Palace?  Now you can!

“An impressive collection of filmed plays featuring a host of world renowned performers is now available to order via BROADWAY THEATRE ARCHIVE: GREAT PERFORMANCES Set 1, which includes the plays DEATH OF A SALESMAN, FOR COLORED GIRLS…, UNCOMMON WOMEN and ALICE AT THE PALACE.”

While Alice at the Palace was previously available as a standalone, it is probably going out of print soon, so this collection might be the only place to see it in the future.  Plus you get some other fantastic Broadway shows to boot.
Get yours now!