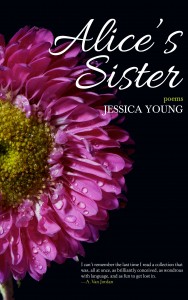 If you are an LCSNA member, then you will see this review in the Winter issue of our wonderful members-only magazine, The Knight Letter. But in case you’re a lover of literature who isn’t a member yet, I wanted to share my review of a dark and fascinating new poetry book.  The opinions I express herein are mine, and not necessarily those of the LCSNA as an organization.

I don’t usually offer long posts like this, but in addition to alerting you to this compelling little book, it also gives you a taste of just one aspect of our terrific twice-yearly magazine.  Like the rest of the LCSNA’s features, The Knight Letter is a labor of love and entirely volunteer-created.  Even if you can’t make it to our meetings in person, many members join the LCSNA simply to delve into the delights of The Knight Letter, which features meeting recaps, Carrollian articles, reviews, amusing pop culture references, collectibles information, and of course, pictures and conversations.  Many years ago it started out as a humble newsletter, only two or three pages long.  Over the years it has blossomed into a full-fledged literary magazine of about 50 pages per issue.  I read every issue cover to cover–it’s that good. And it’s free with membership in the LCSNA.  To learn more about joining the LCSNA, click me.

On any given day, you can find articles from anywhere in the world pointing out aspects of our society—particularly our laws and politics—that seem to mirror the topsy-turvy, nonsensical worlds created by Lewis Carroll in his two Alice books. In Alice’s Sister, a quietly powerful book of poems by Jessica Young, the comparison comes closer to home, specifically to a family of four: a little girl named Alice, her older sister Mary, and their mother and father. All four are given their chance to speak out individually, and they do so in a fascinating mélange of styles and meters. The next-door neighbor who gives the girls piano lessons also contributes a voice, as do an omniscient narrator and a surprise character or two. The resulting narrative mosaic, divided into what might well be called four dreamlike fits, charts the course of an unspeakable event within the family that tears it asunder irreparably. But while the tale is told through many voices, this is not Rashomon; there is no disagreement here about what happened, only how to live with it.

The cycle of poems is further enriched by Young’s occasional inclusion of a few phrases from Carroll’s Alice books. The elegant and remorseful ironies she earns by weaving a few of Carroll’s playful words amongst her own somber ones will resonate deeply with any lover of the original works. Young also offers her own evolving versions of “Jabberwocky” at key points in her disturbing tale, continually recalculating the cost of trust violated. There, as in the other poems, the characters find not gleeful nonsense, but a numbness or non-sense that alters every familiar detail of the physical world and makes  it suddenly alien, and possibly hostile, with scant hope of the sought-after escape or release:

My fingers move, my mind does too,
I hit a C and picture tea.
Mad hatted friend, what did you brew?
There’s so much it’s a sea.

The sea begins to rise, quite fast.
The houses gone, the whole world wet.
The landscape is now deep and vast,
and everywhere—a threat.

Yet, by the end, there are a few faint glimmers of hope and healing, bringing the cycle to a believable and satisfying close. Young is careful to note at the end of the book that this is not an autobiographical story, but that she hopes to do justice to the reality of the characters she has created. She has done so, admirably. My one minor critique is about a printing choice: For reasons that become clear, Young wants to set apart the poems narrated by the father. But rendering his poems in a very faint, gray print makes them a bit more difficult to read on the page than I think advisable.

The best compliment I can pay any book is to say that it rewards repeated readings.  This one does.  It is not for children, and it is not “feel-good” poetry.  But it is likely to make you feel many other emotions as the compelling story slowly and inexorably unfolds before you.