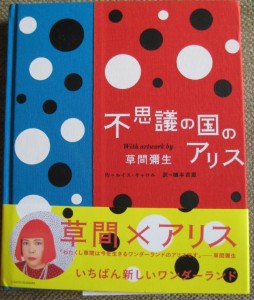 Yayoi Kusama’s Illustrations for Alice In Wonderland have now appeared in Japan, in a new translation by LCSNA member Kimie Kusumoto.  Kimie has already translated Alice once before, for an edition illustrated by British artist Brian Partridge.  Kimie explains, ” I translated this time using a different style of Japanese than for Brian’s Alice book. Brian’s Alice was so cute and characters were drawn rather comically, so I tried to translate it in a tone that will fit for young girls. For Kusama’s, I tried to choose a rather ‘dry’ tone and tried not to be explanatory, though I am not sure how much I fulfilled what I planned. There are also intentions of the editors, you know?  For instance, I wanted to keep mile or foot or inch as they were, but the publisher asked me to change them to metric system as Japanese people use them normally.”

The English edition bearing Kusama’s illustrations was published in 2012, and is still available on Amazon.com and other resellers.

Our congratulations to Kimie on this new publication!