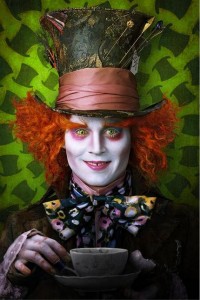 From the “knock me over with a tea tray” department comes news reported by one of our faithful Mimsy Minions: Johnny Depp is set to return as the Mad Hatter in Disney’s inevitable sequel to their shockingly successful 3D Alice in Wonderland.  The new film, tentatively titled Into the Looking Glass, will be directed by James Bobin rather than Tim Burton.  Screenwriter Linda Woolverton is again on board, so we can probably expect more of the same.  But as she already used a number of Looking-Glass characters in the first film, it’s not clear what the cast of characters or plotline will be this time around.  For more information, click here.