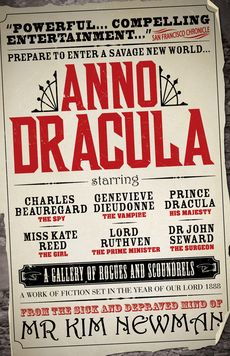 A dour and silent vampire beside the Prime Minister gave him a ribbon-tied folder of papers. Godalming thought he was connected with the secret service.

‘Thank you, Mr. Croft,’ Ruthven said, ripping the ribbon. He
extracted a paper with finger and thumb and casually whirled it across the table to Sir Charles. ‘This is a list of prominent people suspected of conspiracy against the Crown. They are to be arrested before the sun sets tomorrow.’

Sir Charles’s lips moved as he read the list. He put it down and Godalming was able to glance over it.

‘Gilbert?’ Sir Charles asked. ‘Why? The man’s as much a vampire as you or I.’

‘As much as you, maybe. He has lampooned us constantly. Many cannot see a vampire elder without sniggering. Not, I think, an attitude we wish to foster.’