Given plenty of money and a reliable seat cushion, I am relatively certain that a keen fan could see 365 different community theater productions of “Alice in Wonderland” this year. Amongst the ever-popular homages to the Disney film, it is always nice to hear of a production that takes a more local angle. “Alice In Dingleland” promises just that. 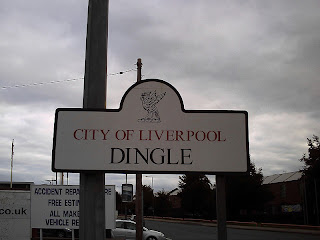 Dingle is a neighborhood of the English city of Liverpool. Liverpudlians, also known as Scousers, have a strong regional identity and an even stronger accent (think early Beatles).

Following on the success of their first pantomime “Cinderella and her American Fella,” the Dingle Community Theatre, have created a “scousalized pantomime” version of Alice in Wonderland:

“Alice In Dingleland” follows the journey of ‘posh’ Alice as she is transformed into a true Scouser after following the white rabbit into the Williamson Tunnels.

Using local settings as our inspirations… Dickinson’s Dingle beauty spot, the Tunnels and Princes Park, we have encountered many characters such as the Scouse Mouse, Dave the Knave “I’m innocent, it’s a stitch up”, the militant gardeners, “you’re a name not a number”. The White Rabbit of course, and the double act that is the Mad Hatter and the March Hare, “Mad, Mad I’m fuming!”