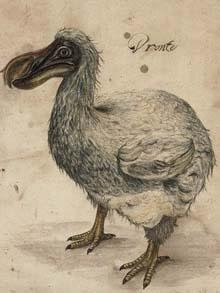 In all the hubbub of newly released character and scenery pictures from Tim Burton’s Wonderland, only the Telegraph (U.K) has taken note of a previously undiscovered 17th century picture of a dodo. The picture is particularly important as it was drawn before the bird became extinct, although it is uncertain whether it was drawn from life. The picture is to be sold at auction by Christie’s on July 9.