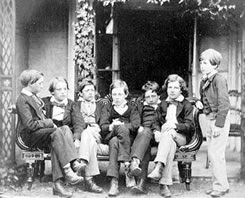 (Note from England #3!)
Lewis Carroll visited Twyford School, which was attended by his younger brothers and cousin, and took the earliest known photographs of it and its pupils. This year, the school celebrates the 200th anniversary of its current site with various events including the Lewis Carroll Photography exhibition (previously shown at Dimbola Lodge and the Playhouse, Oxford). The official opening of the exhibition includes a lecture by Edward Wakeling on Lewis Carroll and his Twyford experiences, followed by a dinner which will continue the Lewis Carroll theme.

There is a £20 charge for the dinner and lecture, and tickets must be purchased in advance.