The meeting is free and open to the public. However, to ensure there are virtual seats for the event we ask that you register. The Registration process will be announced at later date.

The Agenda with times will be available in the near future.

April 23: The Tortoise Who Taught Us: Scholars Day

The Goal of this half-day is to bring specialized knowledge and works of scholarship to light.

After a break, the 16th USC Wonderland Award be held using Zoom. Submissions will be available for viewing before the Award ceremony.

This presentation argues that each of the Alice books is a symmetrical work built around a significant center.  The center in Alice’s Adventures in Wonderland is the Cheshire Cat; in Through the Looking Glass it is Humpty Dumpty.

Byron Sewell. CAUTION! Lewis Carroll May Be Funny, but He Is Often Hopelessly Addictive and May Even Result in Divorce!

Byron Sewell, a prolific Carrollian author and illustrator for over 50 years, reminisces about funny and interesting encounters with famous English, American, Canadian, and Japanese Carrollians.

April 24: Behind the Looking-Glass: Voices and Visions

Opera has long harbored an infamous infatuation with insanity—beginning with the ubiquitous “mad scenes” of the 19th century and continuing into the 20th century with surrealist dream sequences. This paper examines how Unsuk Chin’s 2007 Alice in Wonderland opera carries this convention into the present day, while also undermining its more exploitative elements. Central to the discussion will be the South Korean composer’s musical treatment of Carroll’s Mad Tea Party, a fractured collage assembled from snippets of baroque opera, nursery songs, freestyle rap, pitch-scrambling anagrams, ticking clocks, and (most tellingly) an allusion to the mad scene from Mussorgsky’s Boris Godunov.

As the recent publication of Alice in a World of Wonderlands shows, the Alice novels are extremely popular in Japan.  Join Yoshi Momma, the noted collector and compiler of the World of Wonderlands Japanese bibliography, and Amanda Kennell, Assistant Teaching Professor of International Studies at North Carolina State University, for a discussion of Japan’s reception of Carroll’s other works and Carroll is seen in Japan.

Jackie Lee. The Game of Logic in Virtual Reality

Lewis Carroll invented the Carroll Diagram in the book – The Game of Logic (1886) to visualize the attributes of things. We re-created Carroll’s riddles in Virtual Reality to experiment with a new expression of storytelling and STEM learning. In this imaginary place with Alice in Wonderland elements, only logic (aided with visualization) can solve crazy and non-sensical riddles. This presentation, will provide a live demo for participants to follow the White Rabbit and learn to solve riddles in a Carrollian way.

Jason Noble & Kathleen Allan. Furiouser and Spuriouser, or Unforeseen Consequences of the Democratization of Knowledge: A Musical Fairytale About the Internet After Lewis Carroll and Renée Descartes

Furiouser and Spuriouser is a composition for 8-part choir that reimagines Wonderland as the internet and Alice (Allysse in millennial spelling) as a young “digital native” forming her early impressions of reality. The choristers tell the story and create a fantastical world around it using a combination of narration, choral singing, and extended vocal techniques. In this presentation, we discuss the concepts underlying the piece, and explain how they are given narrative and musical expression.

In this presentation Mark Richards explores how our response to being faced with what appears to be nonsense can lead us from the ridiculous to the sublime, as exemplified within the fields of mathematics, surrealism and the works of Lewis Carroll.

Edward Wakeling & Caroline Luke. The Life of Edwin Dodgson – Brother of Lewis Carroll and Missionary to the South Atlantic Islands

An outline of our new book about the life of Lewis Carroll’ young brother, Edwin Heron Dodgson. I will outline how my co-author, Caroline Luke, fits into the Dodgson family. Caroline will briefly introduce me. I will then explain Edwin’s early life, his school life and his search for a career, and his decision to become a missionary. as well as his role in a school for rescued slave boys in Zanzibar (East AfrIca). Caroline will outline briefly Edwin’s time on the South Atlantic Island of Tristan da Cunha. Our talks will contain extracts from letters written by Edwin. 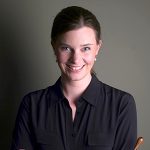 Kathleen Allan. Kathleen Allan is a conductor, composer and clinician who is equally comfortable working in early, contemporary, and symphonic repertoire. She is the Artistic Director and Conductor of the Amadeus Choir of Greater Toronto, Artistic Director of Canzona, Winnipeg’s professional Baroque choir, and a Visiting Professor at Western University. She holds a degree in composition from UBC and a master’s degree in conducting from Yale University. Ms. Allan conducted the world premiere of Furiouser and Spuriouser at the Banff Centre in 2018. 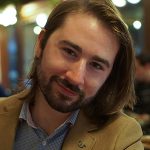 Joe Cadagin. Joe Cadagin recently received a doctorate in musicology from Stanford University for his dissertation on the Lewis Carroll madrigals of Hungarian composer György Ligeti. Excerpts from this study were awarded first place at the 2019 University of Southern California Wonderland Awards, generously sponsored by the LCSNA. As a follow-up to his dissertation, Dr. Cadagin is preparing an article on Ligeti’s unfinished Alice musical. His features and recording reviews appear monthly in the pages of Opera News. 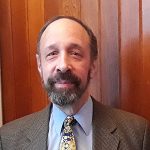 Richard Kopley. Richard Kopley is Distinguished Professor of English, Emeritus, at Penn State DuBois.  He is the author of The Threads of “The Scarlet Letter” (2003), Edgar Allan Poe and the Dupin Mysteries (2008), and The Formal Center in Literature (2018). A long-time reader of Lewis Carroll, he is a long-time member of the Lewis Carroll Society of North America. 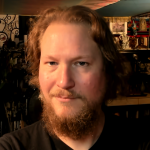 Eric Gerlach. Eric grew up in the Haight Ashbury in the 80s and 90s, studied the history of philosophy and religion at UC Berkeley and the Graduate Theological Union in Berkeley, CA, and taught the history of Egyptian, Indian, Greek, Chinese, Islamic, and European thought for fourteen years, as well as their impact on the world and individual character. He studied the human mind, how meaning works, and, how Poe’s detective stories, Carroll’s fantasies and Wittgenstein’s thought experiments provide perceptions, memories, emotions, and words woven together as logic and thought, one situation at a time. 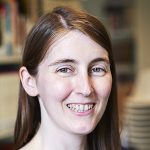 Amanda Kennell. Amanda Kennell is an Assistant Teaching Professor of International Studies at North Carolina State University. She is currently working on a book, Alice in Evasion: Adaptation/Carroll/Japan about Japanese adaptations of Lewis Carroll’s Alice in Wonderland novels from 1899 until today.  Dr. Kennell’s work has been published by the British Museum, theJournal of Adaptation in Film & Performance,The Journal of Popular Culture and Film Criticism.  She formerly taught at the University at Buffalo and has held fellowships from the Sainsbury Institute for the Study of Japanese Arts and Cultures, the Andrew W. Mellon Foundation, the Nippon Foundation and the Cassady Lewis Carroll Collection.  Her Ph.D. is from the University of Southern California, and her M.A. is from the University of Pennsylvania. 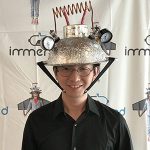 Jackie Lee. Jackie Lee, Ph.D. is the founder of ScienceVR (sciencevr.com). He is a cross-disciplinary inventor in VR/AR, learning, and Affective Computing and received his Master’s and Ph.D. degrees from MIT’s Media Laboratory. Jackie believes that visualization makes things easier and more fun to learn. He is currently working on building a metaverse by visualizing and distributing human knowledge. 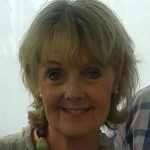 Caroline Luke. Caroline Luke is the great, great niece of Edwin Dodgson, her great grandfather is Skeffington Hume Dodgson.  She grew up listening to stories told by her grandmother, Amy Irene Hume Jaques (nee Dodgson) of Irene’s childhood and times spent with her “Uncle Charles’ and her other Dodgson aunts, uncles and cousins.  One of the stories that always stood out was that of Uncle Edwin sailing to Tristan da Cunha and being virtually shipwrecked there on his arrival.  Fifteen years ago, Caroline was the beneficiary of much of Edwin’s correspondence that had been sent back to the family relating the tales of his life in the various missionary posts that he held.  After showing some of the letters to Edward, they decided they may be of interest to a wider audience.  In 1997 Caroline took over from her father, Philip Dodgson Jaques, as one of the two family executors of the C L Dodgson Estate.  She is married to a retired RAF Officer, has three children and seven grandchildren, and spent much of her career working in welfare and charitable roles. 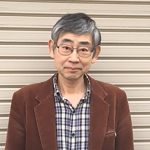 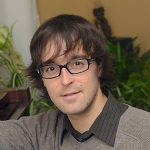 Jason Noble. Jason Noble is a composer and postdoctoral fellow at Université de Montréal. A lifelong chorister and occasional conductor, Jason has composed extensively for choir, as well as other instrumental and electronic media. Jason’s research focuses on meaning in contemporary music, and has been published in journals including Music Perception, Journal of New Music Research, Music Theory Online, and Organised Sound. 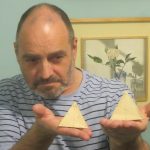 Mark Richards. Mark Richards has been exploring the life and works of Lewis Carroll since the mid-1970s, with a particular interest in Carroll’s mathematics and his nonsense. He is a former Chair of the Lewis Carroll Society (UK) and former Editor of The Carrollian. He has organised numerous conferences and study days and is currently developing lewiscarrollresources.net, a wide-ranging collection of useful resources to support Carroll scholarship. 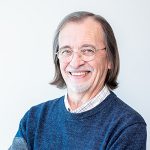 Byron Sewell. I was born in Tucumcari, New Mexico in 1942. A few months later, my parents moved to Albuquerque where I grew up. I earned a BSChE at the University of New Mexico in Albuquerque and I worked for, 50 years, in design and construction of industrial facilities about the production of plastics. I was fortunate that my job assignments took me to wonderful locations. Many lasted months to a few years, so I had time to immerse myself in local cultures. These assignments had a major impact in my life. With a good part of my spare time, I delved into various Lewis Carroll projects. Locations included: London, Sweden, Australia, Southern California, Texas South Korea, Alberta (Calgary and Red Deer), and New Orleans. Coming and going to and from these locations also allowed numerous side trips to other countries, especially in Europe and Japan. My wife, Victoria, and our two girls were able to accompany me later in that journey. We have four grandchildren…none were named Alice. I studied art at The University of Texas in Austin in the 1970’s working on a graduate degree in Lithography (never completed). However, it helped me to draw better. Over the years, I have written and/or illustrated many original Carroll materials, including a few serious bibliographies. My first Carroll collection is housed in the Ransom Center at the University of Texas at Austin. A much bigger collection awaits a new home. My abode is now in Tampa, Florida. I am retired, so now I spend time staring off into the sunlit surf, dodging lizards, and enjoying the sand hill cranes that dance in our back yard…or, perhaps, a flamingo or two and my littlest granddaughter playing croquet. 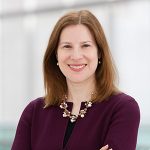 Diane Waggoner. Diane Waggoner is curator of 19th-century photographs in the Department of Photographs at the National Gallery of Art, Washington, where, since 2004, she has curated numerous exhibitions, including The Art of the American Snapshot, 1888-1978: From the Collection of Robert E. Jackson (2007); The Pre-Raphaelite Lens: British Photography and Painting, 1848-1875 (2010) and East of the Mississippi: Nineteenth-Century American Landscape Photography (2017). In 2020, she published the monograph, Lewis Carroll’s Photography and Modern Childhood (Princeton University Press). 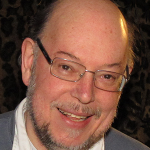 Edward Wakeling. Edward Wakeling joined both the British and American Lewis Carroll Societies early in their existence. He was made Secretary of the British Society in 1976. He has since held the posts of Chair and Treasurer in the British Society. He helped to organise the First International Lewis Carroll Conference held at Christ Church. He is a member of Christ Church having undertaken Graduate Studies there in 1981/82. He has written extensively on Carroll over the last three decades.