Lews Carroll in Film and Television 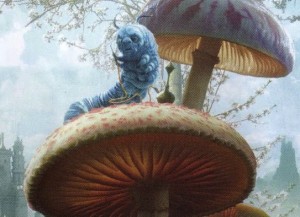 Versions of Lewis Carroll’s stories in films and on television are too numerous to list; he has inspired and continues to inspire so many people.

Walt Disney, of course, was enormously influenced by the Alice books, and was determined to produce his own version.  Early in his career he created a series of short, live-action Alice comedies with a live action little girl as his heroine, in a world of cartoon characters.  It was actually the money he earned from these first comic shorts, not Mickey Mouse, that saved his studio and launched his career.  Then after a number of false starts, trying to find his own way of envisioning Carroll’s world, Disney produced his 1951 animated version, which was not well-received at the time, but has become an enduring favorite with children over the years.  Now in 2010, the Disney company is producing Tim Burton’s Alice in Wonderland, which presents Alice and many of the characters from the two books in a new plot of Burton’s own devising.

And Disney is just one example.  Think about Neo following the white rabbit tattoo in the film The Matrix, or SyFy channel’s 2009 futuristic Alice miniseries, to name but two.  The list is literally endless.

Below is a modest selection to pique your interest and start you off on your own adventures.

Please note: All links provided on this site are for reference only, and do not necessarily represent an endorsement of a given site or its contents.  If you know of additional links appropriate for this or any of our other pages, please send the link to us!  We are always looking for new, good-quality links relating to Lewis Carroll.

LCSNA member David Schaefer was perhaps the foremost collector and expert on film versions of Alice in the world.  Below is his “short list” of notable films, both short and long.